Gujarat Budget 2017-18 As PDF Ahmadabad: Deputy Chief Minister and Finance Minister Nitin Patel made history on Tuesday presented the budget year 2017-18. Afternoon 1: 14 is the budget speech was finished at 4:20 pm. He did not sit on the neck with the budget gave farmers and young people in view of the upcoming elections, woo Nitin Patel are constantly speaking. 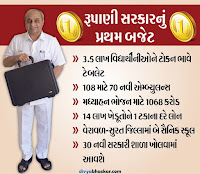 Ministers take the name of ads

Nitin Patel, who recorded the longest budget speech to take the new disclosures to government ministers by name. Almost a quarter of the budget speech lasting three hours Nitin Patel had called more than a dozen ministers. He made special reference to the tank advertisements representations and demands made by ministers.

Bhulyam was not happy, Rupani Modi

In 1995 it became the first BJP government minister Suresh Mehta was the longest of the 70-page budget speech. They are tired of having to speak over the budget was read during the second part of the discourse of State Minister Hemant capatavalae. The budget speech lasted approximately 2:30 hours. Today, about 40 pages when Nitin Patel's throat was worse than budget.

Today(21-01-2017) our Finance minister Shree Nitinbhai Patel  announced a budget for Gujarat. It is the last budget of present BJP Government Of Gujarat's 13th Assembly and First of Chief Minister Vijaybhai Rupani. Nitinbhai Patel announced that this budget is for citizen. This budget is about  1,72,179  Million.

Here some Highlight of this budget.
This are also help you all for Government Competitive exams like -UPSC, SSC, IBPS, Banks and any other exams Daily. GK And Study Materials Updates   Latest News Updates Now job Vacancy, Current affers,   And More Visit my Home page Click Here


Click Here To Get Full Details Of Budget In Gujarati
Bhavesh Chothani February 22, 2017