The Right of Children to Free and Compulsory Education (Amendment) Act, 2019 has been notified in the Gazette of India

The Right of Children to Free and Compulsory Education (Amendment) Act, 2019 which was passed by the Parliament on 3rd January, 2019 received the assent of the President of India on 10th January, 2019.It has been notified in the Gazette of India. Gazette Notification can be found on the given link 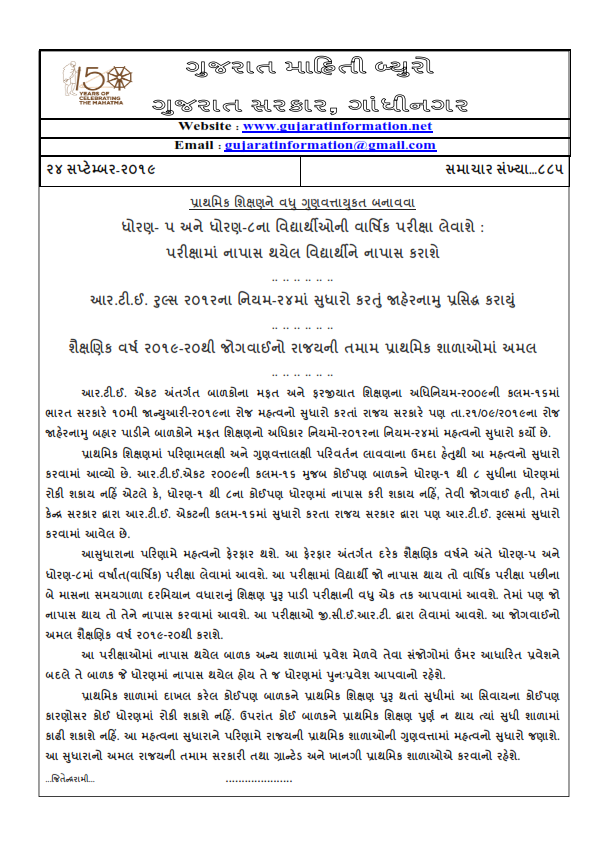 Context: The Right of Children to Free and Compulsory Education (Amendment) Act, 2019 has received the assent of the President of India. The bill mainly seeks to do away with the no-detention policy in schools.

Significance: The legislation is significant as it brings accountability in the elementary education system. The proposal received the support of a majority of state governments.

Rte The Government of India also made a significant amendment to Article-1 of the Free and Compulsory Education Act-II under the Act on January 7, 2009 and the State Government also issued a Notification dated 9/3/9 and amended the Rules of the Right to Free Education for Children.


This significant improvement has been made with the noble purpose of bringing about a resultant and quality change in primary education. According to Article 4 of the RTE Act, it was provision that no child can be stopped in the standard from Class I to VII, that is, it cannot be napped in any of the norms from Std. .E. The State Government, which amended Article-1 of the Act, also issued RTE The rules have been amended.

Improvements will result in significant changes. Under this change, every year of the academic year will be conducted annually (yearly) examination in Standard-I and Standard-1. If the student fails in this exam, one more opportunity will be given to provide additional education during the two-month period after the annual examination. Even if it fails, it will be discarded. These exams are from GCERT Will be taken by This provision will be implemented from the academic year onward.

In the event that a child who is enrolled in these exams is enrolled in another school, instead of age-based admission, the child will have to re-enter the same standard as the one who has failed. No child enrolled in primary school can be stopped in any standard for any reason other than the completion of primary education. In addition, a child cannot be expelled from school unless his / her primary education is completed. This significant improvement will result in a significant improvement in the quality of the state's primary schools. The reforms will be implemented by all Government and Granted and Private Primary Schools of the State.

The Bill seeks to amend the Right to Education (RTE) Act to abolish the “no-detention” policy in schools. Under the current provisions of the Act, no student can be detained up to class VIII.
As per the amendment, it would be left to the states to decide whether to continue the no-detention policy.
The bill provides for regular examination in classes V and VIII, and if a child fails, the amendment bill grants a provision to give her or him additional opportunity to take a re-examination within two months. Such children will be provided with two-month remedial teaching to perform better in the re-examinations. If the students still do not pass the exam, the state government may decide to detain them.

The Right of Children to Free and Compulsory Education Act, 2009 (the Act) provides for free and compulsory education to all children of the age of six to fourteen years.

According to this provision “no child admitted in a school shall be held back in any class”. This translates into automatic promotions to the next class every year until Class VII. Instead of exams, schools are supposed to hold Continuous and Comprehensive Evaluations (CCE) for every child.

Need for removal of this clause:

The provision had attracted criticism with several states and schools complaining that it compromised on academic rigor and learning levels and quality at schools.

The TSR Subramanian committee for formulation of the National Policy on Education has also suggested that ‘no detention’ policy should be discontinued after Class V. It had recommended restoration of detention provision, remedial coaching and two extra chances to each student such to move to a higher class.

A sub-committee of the Central Advisory Board of Education also studied the issue closely and recommended a provisional detention clause at Classes V and VIII. In 2013, a parliamentary panel had also asked the ministry to ‘rethink’ on its “policy of automatic promotion up to Class VIII”.