Gujarat Budget 2019 PDF Download : Finance Minister Nitin Patel today presented a full-size budget for the Financial Year 2019-20. For the first time after the establishment of Gujarat, a budget of 2 lakh rupees was introduced. Finance Minister Pranab Mukherjee said that the budget presented in the budget of Rs 2,04,815 crore has been given to the welfare, clothes and housing. Thus, the state government has presented a back-to-back budget.


There have been many problems related to education related to school fees, admissions, student security, defect of rooms for some time in the state. As well as every year, efforts have been made to resolve the serious problems of farmers' suicide in the crisis caused by the flood water crisis and medical problems in government hospitals. The finance minister has 20.63% of the total budget for agriculture, irrigation and rural development, while 15.76% for water, supply, sanitation, housing and urban development, 8.43% for health and family welfare and 20.79% for education, sports, art and culture. 65% of allocation is made.. 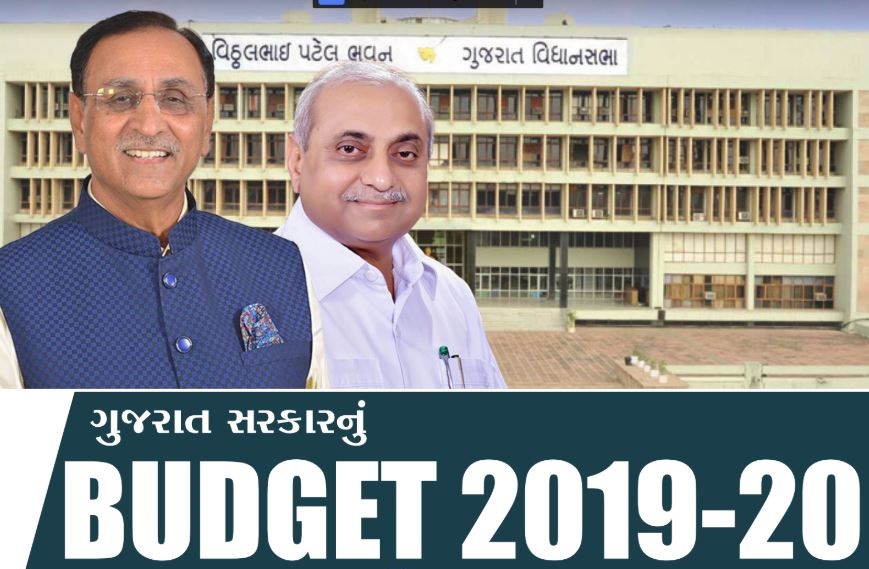 No new tax has been levied or any hike in existing tax was made in it.

Patel said in his address in the house on the second day of the first session of it today said that Vote
on Account proposal was for period of four months upto July 31, 2019 . A modified budget would be
presented after the LS polls.

During the year 2017-18, the per capita income of the State at current prices stood at Rs 1,71,652,
which is 12.6 per cent higher than previous year. The share of Gujarat’s industrial output in national
output stood at 16.8 per cent.

Rs 6,595 crore allocated for #SardarSarovarProject A total allocation of Rs 7,157 crore has been made for #Sauni #Yojana and other #Water Supply
Schemes

For the first time, the state #budget is worth more than Rs 2 lakh crore i.e. Rs 2,04,815 crore. We
are all part of this historic occasion

Under second phase of Sauni Yojana, the work of laying pipelines up to three important dams for
Jamnagar, Gondal and Bhavnagar has been completed. It has been planned to fill 35 reservoirs and
more than 100 check dams as per the availability of Narmada water

#Government to spend Rs 20,000 crore over the next three years to ensure no household in

#Gujarat is left with a tap for drinking water. For this year Rs 4,500 crore of provision has been
made for Nal Se Jal Yojana

A new veterinary college at #Himmatnagar under Kamdhenu University is proposed.Initial provision
of ₹1 cr for the same. Provision of ₹134 cr to establish 4000 dairy farms each having 12 milch cattle.
Government of #Gujarat allocates Rs 123 crore for new Shetrunjay Division and Rs 112 crore for
conservation and breeding of wildlife and to protect endangered species.

It is proposed to upgrade GG Hospital, Jamnagar with improved facilities and as part of first phase,
provision of ₹25 crore for ‘Maternity Child’ hospital block: Deputy CM and #Gujarat Finance Minister,

#Gujarat is the first state in the country to declare policy on “Reuse of Treated Waste Water”.
Provision of ₹199 cr for various projects under this policy 600 Million cubic meter water will be stored by constructing a barrage on Narmada river under Bhadbhut scheme by stopping saline water ingress into the basin of #Narmada during high tide.

New 5,000 classrooms to be built in primary schools, which will provide better education facilities to
approximately 1.5 lakh students, for which provision of ₹454 crore has been made

To provide house to all by the year 2022, Pradhan Mantri Awas Yojana is being implemented. 4.80
lakh houses have been sanctioned under this scheme. Provision of ₹1,248 cr for this scheme.

Six laning of Sarkhej Gandhinagar highway at the cost of ₹867 cr is in progress which includes
construction of nine flyover – railway over bridges including elevated corridor of 4.5 kilometers
Gujarat Government allocates Rs 221 crore to extend services of ST by 1,000 new buses will be
provided by the State Government through Gujarat State Road Transport Corporation, in which
electric and CNG-run buses will be included.

– Rs. 500 crore revolving reserved fund for zero per cent loan to farmers.
– A total of Rs 620 crore disbursed to farmers till now under Ahmedabad-Mumbai bullet
train in Gujarat.
– 5,000 hectare saline coastal padtar government land to be allotted to shrimp farming.
– Gujarat’s economy registered growth of 11.2 percent during 2017-18.
– Increase in VAT subsidy on per litre of diesel by Rs 3 for fishermen.
– In addition to routine allocation for water development Rs 329 cr proposed to repair
check dams.
– ‘sex semen lab’ in Patan with an outlay of Rs 47.5 crore.
– New fishing dock in Valsad district.
– Daily allowance given to families of fishermen caught by Pakistan Marine Agency
doubled to Rs 300.
– University for organic agriculture in Halol in Central Gujarat.
– Monthly widow pension increased by Rs 250 (Rs. 1250, up from Rs. 1200). widows to
get pension irrespective of son’s age.
– Income threshold for availing Ma Scheme has been increased from Rs 3 lakh to Rs 4
lakh