Gandhinagar: Finance Minister Nitin Patel is presenting the interim budget of Gujarat state assembly. Since the Lok Sabha elections, the state government presents an interim budget instead of the full budget.

Gujarat ranked first with 15.36% increase in livestock census
300 crore assistance for export of skimmed milk powder
- 11,216 crores spent in all the projects
Over 35 reservoirs and over 100 check dams were organized in Jamnagar, Bhavnagar, Rajkot
- Increasing income limit in Vatsalya Yojana, Assistance increased from Rs. 3 lakh to 5 lakh 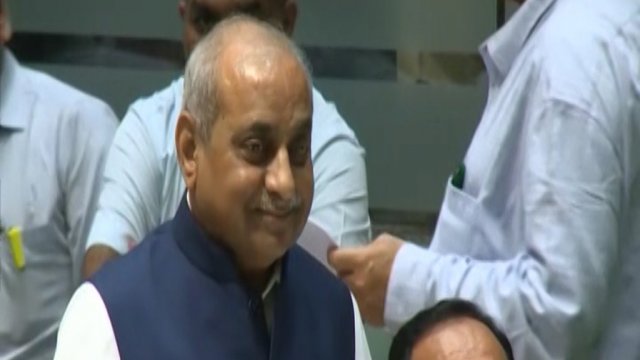 - 2283 Crore allocated for different schemes of ICDS for children, adolescents and pregnant mothers.
- Expenditure of 1 lakh 13 thousand crores for enriching classrooms
- Drop down rate in drop out ratio, 1.42% drop-out rate in standard 1-5

- Special assistance package of 2285 crore to help 23 lakh farmers in 96 taluks this year
- By 2022, according to the Prime Minister's housing scheme, 7.64 lakh families will be provided in urban areas.
- The commission paid per quintal to the fair-value shop traders has been increased from Rs 102 to 125, from April 1 to March, the annual commission will increase by Rs 55 crore to Rs 242 crore.
- The state government will implement the Safe and Secure Gujarat Project

- Gandhinagar and Sola Civil Hospital will be upgraded to Super Specialty Hospital
- Monthly monthly increase of Asha Faciliyre sisters increased monthly salary, 3751 sisters get benefit
- An increase of 900 in the salary of Anganwadi sisters
- Now 7200 will be given instead of 6300
- The son of widows can also give pension
- The pension will be increased to 250 to 1250
- The state government has an annual burden of Rs 349 crore
- Increasing salaries of sister-in-law sisters will now be increased to 4,600 from 3200 pais today
- In the next year, 9713 posts will be filled in the police force, of which 554 prisoners will be seized
- Increase of 50% increase in old pension scheme, increased from 500 to 750
- A mobile rescue, drone surveillance, CCTV network will be developed at the cost of 97.85 crore for the defense of Asian lions.
- Work of roads and bridges over 2000 crores will be approved in 2019-20 under the CM's scheme.
- To increase the coverage of 8 corporations under the Department of Social Justice and Empowerment, the support of 100 crores will be increased by 1.5 times to 150 crores
- Daily given to the fishermen's family staying in Pakistani jails, Rs. 150 allowances increased by Rs. 300 fall
- 54 in municipal corporation and 21 found in municipality will get 74 flyovers
- From Ahmedabad to Shankeshwar, the trail will be constructed at a cost of Rs. 20 crores
- 103 kilometers long will be the pedestrian
This palanquin will make Maharaj Sahib and Mahasati jiar for pilgrimage
-Will ride to make the victims uncomfortable
- The complete phase of Ahmedabad Metro will be completed by 1 December 2020

All of the people of Gujarat's development area have noticed
- Nitin Patel is presenting the budget for the sixth time
-Gujarat's people have trusted us for 22 years.
- committed to social and economic development: Nitin Patel
- Instruction as being a Lok Sabha election
- Making irrigation schemes more upbuilding
- Government of two thousand agricultural produce bought at a supportive price
-Security of Unity: Employment Opportunity: Nitin Patel
- 10 percent started the implementation of economic policy
The world's largest solar plant will be set up at Dholera, at 5000 mega watts
- Announcement of fishermen to increase life expectancy from 150 to 300
- The government will raise a revolving fund of Rs 500 crore for the farmers
- A plan to meet the interest subsidy available to farmers and to get time
Gujarat's contribution to the development of the country is 22%
- Salt water will be made from salt water to get enough water in Kutch
- At the time of shortage the government is with the farmers
- The biggest shortage aid in state history
- The 2019-20 budget will be presented after the Lok Sabha elections
- More than 1500 crore shortage assistance has been given to farmers of the scarcity area
- 6 crore 84 thousand kilograms of grass has been delivered to the drought-hit areas
- Gujarat's contribution to agriculture sector is 7.30%
The state's agricultural growth rate is 12.11 percent
- The government spent 436 crores to give more electricity to farmers 2 hours
- The government is trying to double the income of farmers
This interim budget is likely to create attractive ads for youth, women and farmers. Today, at 11 o'clock, Nitin Patel will present the interim budget of Gujarat state. Last year, a budget of Rs 1.83 lakh crore was presented in 2017-18.